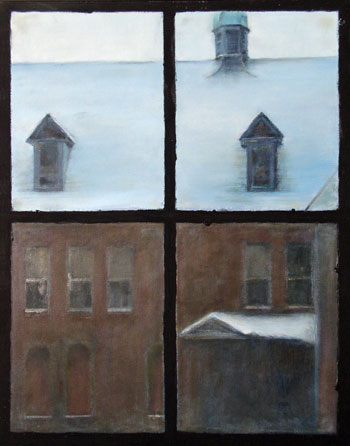 A classroom exercise that went further than it was supposed to, this is a replication of a photograph by Julia Solis, shown with the photographer's permission.

I wanted to see if I could capture the some of the sense of loneliness and muted horror that was evident in the original. If you were a resident at this institution, which had already been abandoned by the time the photo was taken and has since been demolished, this four-paned scene might have been your first view of the world outside your room every morning. Who or what came and went through the covered doorway down below? What sounds can you imagine would echo up and down the narrow courtyard throughout the day and night? What would happen to your conception of the world, when your view of it each day was limited to the slice of sky beyond the steep slope of the roof?